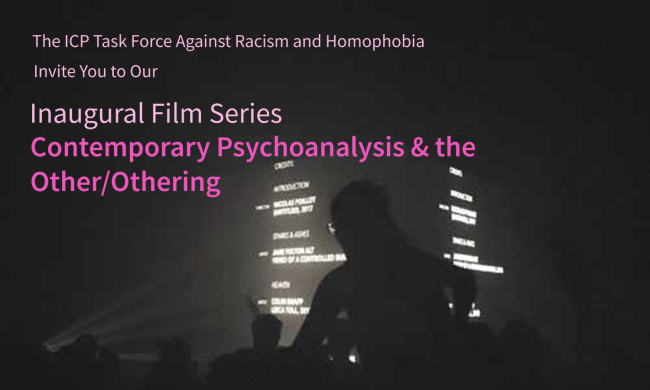 The Task Force against Racism and Homophobia invite you to our online series:

Contemporary Psychoanalysis and the Other/Othering.

Taking an in-depth look at the Other as well as our own practice of Othering presents a challenge for contemporary psychoanalysis. These five films confront us with a view of the lives outside the conventional, white, heteronormative, and able-bodied perspectives to offer us a focused discussion about what these films depict in the Other as well as what assumptions of the Other these films capture in us. We’ll watch all five films on a video platform that allows us to come together and share our thoughts and reactions during the film. The moderated discussion that follows will focus our attention on specific themes from each film, creating space to share our individual experiences with each
other.

January 21st Crip Camp: A Disability Revolution moderated by Christina Emanuel MFT, PsyD – 7 to 10pm PST (NO LONGER AVAILABLE FOR REGISTRATION)
In the early 1970’s, teenagers with disabilities face a future shaped by isolation, discrimination and institutionalization. Camp Jened, a ramshackle camp “for the handicapped” in the Catskills, exploded those confines. Jened was their freewheeling Utopia, a place with summer sports, smoking and make-out sessions awaiting everyone, and campers who finally felt fulfilled as human beings.

Moderator – Christina Emanuel, MFT, PsyD
Christina Emanuel is a psychoanalyst and psychotherapist in private practice in Pasadena, California, where over half her caseload is composed of individuals with autism and other disabilities and their families. At ICP, she is a Training and Supervising Analyst, a former member of the Board of Directors, and the former Chair of the Program Committee. She is also a member of the Board of Directors and Chair of the Webinar Committee of the International Association for Relational Psychoanalysis (IARPP). Christina writes, teaches, and presents about autism, disability studies, and relational psychoanalysis.

March 4th Pariah moderated by George Bermudez PhD, PsyD and Nicole Nelson PsyD, LMFT, LPCC – 7 to 10pm PST
Teenage Alike (pronounced ‘Aleekay’) lives in Brooklyn’s Fort Greene neighborhood with her strict Christian mother, her police officer father and her sister. A lesbian, Alike quietly embraces her identity and happens upon her first female lover. However, she wonders how much she can truly confide in her family, especially with her parents’ marriage already strained.

Moderator – George Bermudez, PhD, PsyD and Nicole Nelson, PsyD, LMFT, LPCC
George Bermudez is a Psychologist /Psychoanalyst and Training and Supervising Analyst at ICP; Core Faculty & Director of the Child/Family Studies Specialization at Antioch University. Authoring “The Social Dreaming Matrix as a Container for the Processing of Implicit Racial Bias and Collective Racial Trauma,” Dr. Bermudez is developing a synthesis of social dreaming and community psychoanalysis that contributes to the illumination of ‘unconscious citizenship,’ with the ultimate goal of engendering a more inclusive and ‘deliberate democracy.’

Nicole Nelson is a psychotherapist and psychoanalyst in Sacramento, CA. Nicole has been an adjunct faculty member at several universities, and is currently co-teaching the “Psychoanalytic Perspectives on Power and Privilege” course in the four-year psychoanalytic certificate program, as well as teaching in the Saturday Series and Foundations courses for ICP. In her practice, Nicole specializes in working with trauma and dissociative disorders. Additionally, Nicole–as part of the LGBTQ+ community herself–works with many patients with transgender, gay, or queer identities at the intersection of religion, race, and disability status.

April 8th Chinese Exclusion Act moderated by Nat Newton, PhD, RPS – 7 to 10pm PST
This documentary allows us to connect anti-Chinese sentiment during U.S. antebellum and the Jim Crow era to the present-day rise in anti-Asian hate crimes during COVID. The film highlights a history of immigrant detention, anti-Blackness that contributed to anti-Asian violence (lynching of Chinese workers inthe 1880’s), class wars between working class whites and migrant laborers, and the White House forces in global capitalism. Themes of masculinity and misogyny, group theory, the narcissism of White supremacy, and Asian American racial scapegoating will be discussed.
Moderator – Nat Newton, PhD, RPS
Nat Newton is a cultural anthropologist and clinical research candidate at ICP. Her anthropological work has won three national awards, including a Fullbright for her work with Vietnamese lesbians and human rights in Saigon. She has lectured, taught and led community organizing efforts in Asian and Asian American communities at Yale University, UC Irvine, CSU Fullerton, Scripps College, and on Sanoili Kolhatar’s “Uprising” on KPFK Radio 90.7.

May 6th Disclosure moderated by Stacy Berlin, PsyD and Joel Miller MD, PsyD – 7 to 10pm PST
Disclosure is an unprecedented, eye-opening look at trans depictions in film and television, revealing how Hollywood simultaneously reflects and, at the same time, manufactures our deepest anxieties and desires about gender. Grappling with films like The Crying Game and television shows like Bugs Bunny and Pose, they trace a history that is once dehumanizing, yet evolving, complex, and sometimes humorous. Themes of how we gender ourselves and others, and how we negotiate conventional masculine and feminine traits in ourselves will be discussed.

Moderators – Stacy Berlin, PsyD and Joel Miller, MD, PsyD
Stacy Berlin is an integrative clinician who works from within a relational framework. She works in a collaborative and interactive manner and is an egalitarian and contextualist in her approach to theory and practice. She conducts seminars in Relational Theory and Dissociation (depersonalization/derealization). Originally trained within Object Relations, she now emphasizes relational trauma, primitive self-states, creativity, play/humor and Buddhist philosophy in her clinical practice.

Joel Miller is a Training and Supervising Analyst at ICP and has a private practice in Pasadena, CA. He has been the co-chair of the Task Force Addressing Racism and Homophobia since 2008. He has been an adjunct faculty for the candidate Power and Privilege course at ICP, and contributor to the Arts Section of The American Journal of Psychoanalysis and the Montreal Review.

June 3 Still I Rise moderated by Veronica Abney, PhD, LCSW and Debra Myers MD, PsyD – 7 to 10pm PST
This film explores the relationship between racism and sex trafficking with the dynamic women closest to the problem and solutions. Over the course of five years in the Bay Area, this film follows the lives of brilliant pioneering advocates, Holly Joshi and Leah Albright-Byrd. Leah and Holly highlight the critical truth that mainstream media, legislators and even activists often downplay the crucial issue that ignores the relationship between racism and sex trafficking which only perpetuates the crime.

Moderators – Veronica D. Abney, PsyD, LCSW and Debra J. Myers, MD, PsyD
Veronica D. Abney is a psychoanalyst in private practice specializing in the treatment of child, adolescent and adult victims of childhood sexual trauma. Dr. Abney is a former president of ICP where she a Training and Supervising analyst, and co-chair of the Taskforce Addressing Racism and Homophobia. Her interests are in the application of modern psychoanalytic theories in cross-cultural treatments and the treatment of childhood trauma. Dr. Abney received her master’s degree at the Smith College School for Social Work.

Debra J. Myers, MD, PsyD (https://debramyersmd.com) is a graduate of Harvard Medical School. She has a private practice of Psychoanalysis and Psychotherapy in West Los Angeles and serves adults and adolescents. During her psychoanalytic training she spent five years as a volunteer telephone counselor at the Didi Hirsch Suicide Crisis Line and two years as an intern-therapist at the Valley Community Clinic, a facility for the underserved. She is co-teaching the Psychoanalytic Perspectives on Diversity, Power and Privilege in the four-year course.